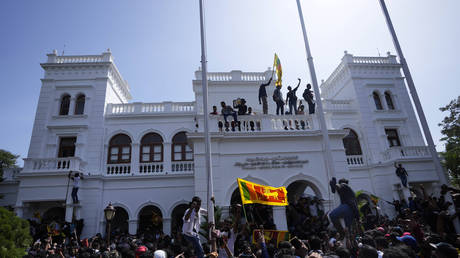 Gotabaya Rajapaksa, President of Sri Lanka fled on a military plane to the Maldives.

Gotabaya Rajapaksa, President of Sri Lanka fled to the Maldives Wednesday. His departure infuriated protesters in Colombo, who rioted upon learning that Prime Minister Ranil Wickremesinghe – whom they also want driven from power – had been made acting leader.

Rajapaksa’s office announced in the early hours of the morning that the embattled president had made it out of the country on a military plane, a day after staff at Colombo’s Bandaranaike International Airport had refused to stamp his passport for exit. It is thought that Rajapaksa is continuing onward to Dubai. He will officially resign Wednesday.

Wickremesinghe was appointed acting president. However, protestors demanded that Wickremesinghe resign immediately in order to allow for the establishment of a temporary government and new elections.

Crowds Sri Lanka: Inside visuals from the premises of Sri Lanka’s Prime Minister’s office in Colombo after it was stormed by protestorsof demonstrators stormed Wickremesinghe’s house, which they had already set on fire over the weekend. Sri Lanka’s state-owned Rupavahini broadcaster went off the air as protesters took over the building.

#WATCH | Sri Lanka: Inside visuals from the premises of Sri Lanka's Prime Minister's office in Colombo after it was stormed by protestors pic.twitter.com/nEoc9zsoBk

Wickremesinghe responded by declaring a state of emergency, as police outside his residence and at the country’s parliament fired tear gas at the crowds of demonstrators.

Under Rajapaksa’s leadership, Sri Lanka has been driven to bankruptcy, defaulting on its foreign loan debts in May and introducing fuel rationing earlier this month. The economic turmoil has been blamed on a loss of tourism revenue due to the coronavirus pandemic, and a climate-motivated ban on chemical fertilizers that halved the country’s agricultural output in a matter of months.

Rajapaksa’s government responded to rising costs by printing more money, further accelerating inflation. Sri Lanka has been left without the income it needs to purchase fuel, food and medicines, due to tax reductions.